Tourist for the day: El Morro 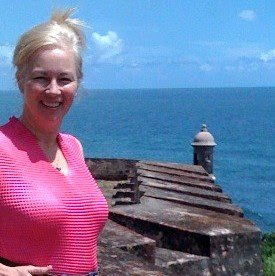 Oasis meets El Morro as we continue being a tourist for the day in our own back yard...

Good morning and welcome to sunny El Morro. Did you know that Puerto Rico was under the Spanish flag for about 500 years until the United States came 100 years ago? Knowing that bit of information goes a long way in explaining the culture and attitudes of this beautiful island. El Morro was constructed on the protruding parts of the land surrounding the city to protect the island from invaders approaching by the sea, which explains why there is a wall going around much of the Old City (El Viejo San Juan).

There is an El Morro in nearby Cuba, too, and it is made in the same style and material.
El Morro in San Juan is actually called Fort San Felipe del Morro but not by anyone on the street. I have a little confession to 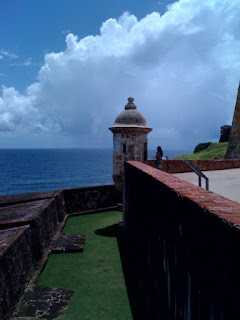 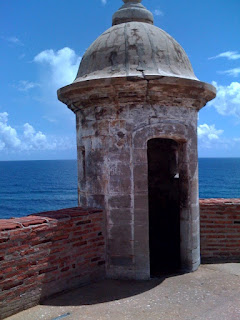 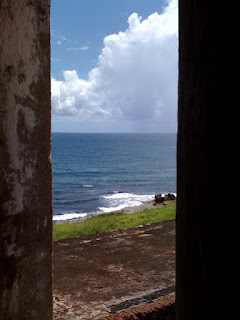 o was taken a bit down the road from El Morro at another fort, Fort San Cristobal, though most tourist call all of these structures El Morro. I like this one because you can walk right into one of the garrettes and take a look at the framed sea.


Come inside with me and let's take a look.


There is a mysterious story about one of these sentry boxes in San Cristobal, La Garita del Diablo (the Devil's Garrette). I must caution you: a legend circulates that says those who dare visit this most extremely situated and the first constructed lookout (1634) might mysteriously disappear. Though word on the street is that the only real disappearance was of a couple who escaped disapproval by way of the sea and left unimpeded to elope. (Oh, how dangerous and romantic!)

I'm feeling a bit hungry for lunch. Why don't we walk down the road and look for something to eat?

Or maybe, first, we could cool off with a piragua? These traditional iced syrups are quite refreshing. Look at the selection on the glass- Spanish and English are respectfully placed side by side. Agua Fria/Cold Water! I think I will have an anise flavored icy p 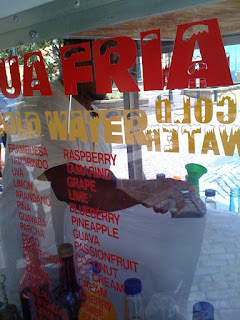 Do you see the large solid block of ice inside the glass cart? The man is shaving it with a special tool, which he then scoops up the ice into a cone and pours flavored syrup all over the top.

If you're like me, you might find the grainy texture disturbing in your syrup. Of course, there are a lot of healthy and calming B vitamins in sesame seeds so it's your decision, entirely. The coco (coconut) flavored syrup is quite popular with the local residents.

For lunch, I would like to have a traditional pastelles with rice and beans. Pastelles are made from plantain and sometimes yucca root ground into a paste and filled with a spicy (but not hot) meat mixture. They are wrapped in 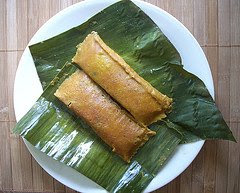 banana leaf, tied with string and boiled for about an hour. It's a tasty meal all by itself but presents a problem for a real vegetarian. (Don't say it!) However, I have found several people who are willing to sell me a dozen garbanzo filled (chick peas), vegetable filled or sometimes soy filled pastilles. However, to be honest, I usually have to provide the textured vegetable protein meat substitute. (Okay, I will say it for you, I'm just a little bit weird.)

Making pastilles is a grassroots (and underground) business that thrives during the holiday season, yet those in the know can obtain them anytime of the year. Getting the best possible pastilles is all about maintaining your local connections. 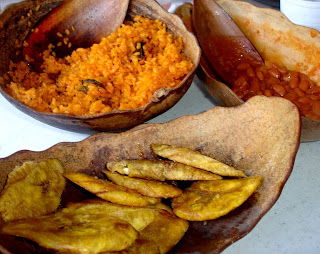 What meal would be complete without a side of crunchy salty tostones? Tostones are large unripe plantain bananas, sliced thickly and fried of both sides until golden. They are served with salt, ketchup, and/or a bit of garlic.

Yum! Warning: these must be eaten fresh or not at all because they can get quite hard and dry. Tourist who eat dried out tostones are often perplexed and disappointed-what is all the fuss about?

[ Make your own! If you make these at home, cut thick slices diagonally, fry in oil for 2-3 minutes on each side. Remove from pan, flatten -I use the bottom of a plate- on a board, and firmly press down. Return the plantain disks to the hot oil. Lightly cook on each side again, remove and place on an absorbent towel. Cook just one large green plantain banana at a time, and serve immediately.

Note: If your plantain's are turning yellow, they do not make tasty tostones. Let them ripen, slice, and gently fry them - once on each side- in hot oil. These are called amarillos. Also, when looking for plantains in the States, go to Chinese grocery stores and/or look for "macho bananas" -a most curious name!]

For lunch or dinner, I can recommend an atmospheric restaurant in the Old City, Raices (Roots), which is know for its mofongo -mashed plantain filled with garlic spiced meat. The waitresses wear white traditional costumes with headdress, and serve on authentically folk dressed tables, complete with a wood and tin service. Two recommendations here: arrive before you are hungry and bring your credit card because service can be slow and the food pricey.

That's okay-afterall, you are getting a taste of Puerto Rico from the past. Just drink a Pina Colada and enjoy the atmosphere. If you don't want to sit in an air conditioned space, you can eat outside, listen to old time Puerto Rican music and watch street life, which is always entertaining, if somewhat overwhelming.


I should clarify a point here, people still eat these traditional foods. Why just this morning, I had freshly made hot tostones with a sprinkle of sea salt crystals and a tiny bit of ketchup. I don't usually have tostones for breakfast, it's just that plantains are in season now. Yes, they are usually available all year, but locally grown freshly cut plantains are of the highest quality and flavor. So I can eat them for all three meals. (Soon avocados will be available, too! Puerto Rican sliced butter! Yum! ) Back on the subject-I'm just pointing out that those atmospheric costumes and, natural, but rough plate-ware are not commonly used anymore except as festive decoration at cultural activities.

Today, there is a blend of the old and new in food as with all things related to culture. For example, take the traditional El Noche San Juan festival, which is both formally and informally celebrated during the summer solstice, specifically on John the Baptists' birthday. (San Juan/St. John) This night is all things pagan and Catholic combined into a modern synergistic mix. If you can handle crowds and would love to throw yourself backward into the cleansing surf a few times-seven to be exact- come to San Juan on this night of its patron saint, and be blessed by Yemayá, the Ocean Mother or St. John (as you wish) with good fortune. The festivities continue for a week and I have participated three times over the years. Recently, the crowds, drinking and commercialization put me off but if you're up for too much excitement then I can only say, it's your party.

Another blend is in reggaetón music, touted as the real Puerto Rican music of today, I remain reserved. However, this group Calle 13, which means street 13, has an interesting sound when combined with the Puerto Rican favorite, the Panamanian (Harvard educated), Ruben Blades. You can see the barrio (community-er-'hood), La Perla (The Pearl) just below El Morro. As a matter of fact, it's right over the wall and next to the sea. I have been down as far as that atmospheric old graveyard (seen in the video), but probably tourists would not be welcomed inside the barrio.

Warning: these lyrics are not tourists friendly. Yes, it's true, we are said to be in the way. Listen carefully to these Spanish lyrics, which say tourists are blocking the view while they take pictures of the view. If like me, you don't particularly like reggaetón music, you should still take a look at this exceptional video. Ruben, you're worth it! 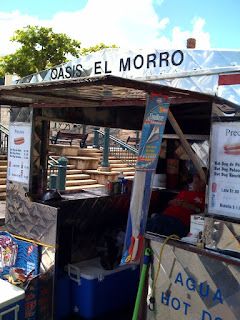 Friends and bloggers, though we are finished with our Oasis at El Morro tour, I hesitate to overload your royal patience with more today. Next stop in our Tourist for the Day Oasis Feature-A Series of Local Views, absolutely must include some spectacular views of Puerto Rican nature. Don't you agree?
Posted by Cynthia Pittmann at Thursday, July 23, 2009 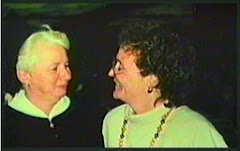